An 80 year old lady presents one sunny afternoon with a regular twitching movement to her left arm only. It has been going for 2 days and she couldn't sleep the preceeding night as she found it quite annoying. She has a PMH of IHD - had a CABG 10 years ago and a pacemaker inserted 3 months prior. She is otherwise well with a normal blood pressure.
At first glance it appears she may be having a focal seizure with regular twitching of her upper left arm. 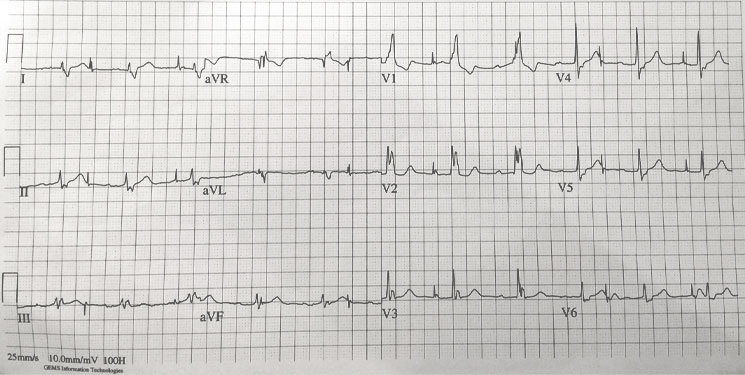 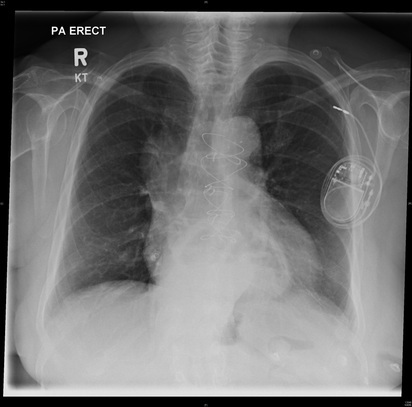 The CXR shows retraction of the pacemaker wire with the lead coiled around the pacemaker pack. Features suggestive of “Twiddler’s syndrome”. Sternotomy wires and valve replacement noted. The upper sternal suture is fractured. Large hiatus hernia.

Lead dislodgement or malposition. The most common reason for loss of capture in the hours and days immediately following implantation is either lead dislodgement or malposition. This is manifested as a change in the morphology of the pacemaker-evoked depolarization when capture is present. A change in the anatomic position of the lead on a chest x-ray may also be seen. Identifying these problems is dependent upon comparison with a baseline (ie, when normal capture was present) 12-lead ECG and chest x-ray.

Inflammation and fibrosis at the electrode/myocardial interface. The inflammatory reaction and the resulting fibrous tissue that occur after implantation may act as an insulating shield around the electrode, effectively raising the threshold for stimulation and attenuating the amplitude and slew rate of the endocardial signal being sensed. This is a process termed "lead maturation”.

Increase in capture threshold. Loss of capture may occur months to years after implantation due to one or more of the following:
A late rise in capture thresholds (ie, greater than four weeks post-implant) in the absence of dislodgment, thought to be secondary to excessive fibrosis at the lead/myocardial interface, also called exit block. or
A primary cardiomyopathic process.

Low pacemaker output. Loss of capture may occur when the margin of safety for the programmed output with respect to the measured capture threshold is too low. While the capture threshold is a specific pulse amplitude at a given pulse duration, the measurement is made at only one point in time and usually with the patient in one position (supine or sitting). Capture thresholds may change during the day; with body position; and in association with various physiologic stresses, such as exercise, eating, and infection.

Lead failure. Intrinsic lead failure may result in loss of capture. This is usually a late occurrence (ie, many years after implantation)

Battery depletion. The longevity of these systems is often 6 to 8 years, but the longevity of any specific pulse generator depends upon the proportion of paced and sensed events, the programmed output and rate parameters, and the stimulation impedance.